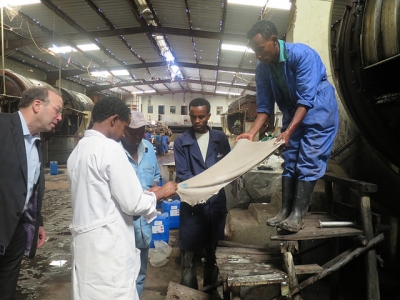 An AGOA expert meets with private and public stakeholders in Ethiopia to discuss opportunities under the agreement./Flickr

Stuck in between bigger battles on trade deals such as the TPP and the TPIP, the African Growth and Opportunity Act was renewed in late June 2015. U.S. President Obama signed the agreement on June 29, extending it for another 10 years. With 38 African countries eligible and close to 7,000 products eligible for the tariff benefits, the passing of AGOA this June merited greater attention. This renewal also comes right before the August 24-27 AGOA forum to be held in Libreville, Gabon; “AGOA at 15: Charting a Course for a Sustainable US-Africa Trade and Investment Partnership.”

AGOA seeks to provide broad and deep access to U.S. markets from countries in sub-Saharan Africa that meet the qualifications, incentivizing export-led growth in the region through good governance practices. Under the agreement, there are a broad number of tariff-free goods the region can export to the United States, mainly motor-vehicle components, footwear, textiles, and apparel. Eligibility is conditional, and is determined by the president of the United States, who reviews the countries and their products each year. There are several factors that determine eligibility for countries, and countries are required to be working towards economic policies that include a market-based economy, poverty reduction, and combating corruption, as well as social policies to protect human rights and not support terrorism. This agreement has an end-goal of  promoting regional development and growth, and eventually to improve the integration of the region into the global economy.  In a statement, Ambassador Michael Froman celebrated the renewal of the AGOA, saying it “will incentivize good governance and pro-growth, pro-development policies, including on labor and human rights, while providing much-needed certainty for African producers, U.S. buyers, and investors.”

The renewal of the AGOA reaffirms its importance as the “cornerstone” of trade and economic relations between the U.S. and sub-Saharan Africa. Since 2000, trade from Africa has nearly tripled, with the biggest beneficiaries being the apparel industries. Fatima Haram Acyl, the commissioner for trade and industry of the African Union Commission argues for its continued importance and administration - exports to Africa have grown 284 percent under AGOA, from $5.6 billion to $21.5 billion in 2012.  AGOA has already accounted for $12.5 billion of exports to the U.S. as of May 2015.

In addition to boosting trade relations, the AGOA has facilitated investment growth in the region - U.S. direct investment in Africa has increased nearly six times since 2000. The AGOA has contributed both directly and indirectly to better job creation in the region, and has been a key part of increasing textile industries in Africa. Soft benefits of the agreement and U.S. investments will also indirectly improve the lives of marginalized society members such as women and children, as well as increase incentives for good governance practices, stability, and security in Africa.

The AGOA was initially passed in 2000 by former U.S. President Bill Clinton and renewed in 2004, 2006, and 2007. Obama’s recent renewal of the agreement, which was due to expire in September 2015,  was the latest iteration of the cycle, and has extended the agreement for an unprecedented amount of time - the AOGA will not require renewal until 2025. This renewal follows Obama’s commitment to support the agreement and strengthen ties between the regions as conveyed at the landmark U.S.-Africa Leaders Summit in August 2014, which resulted in $300 million in support of PowerAfrica, $7 billion in financing for U.S.-led exports and investments, and a total of $33 billion in support of economic growth in Africa.

The AGOA renewal and the trade agreements that resulted from the African Leader’s Summit, illustrate a shift in the economic relationship between sub-Saharan African countries and the U.S. Originally a highly aid-based relationship, these agreements put higher emphasis on free trade, economic liberalization, and development in Africa. Direct aid to African countries has decreased since Obama took office - from a peak of close to $10 billion under George W. Bush to around $9 billion. Obama has chosen to pursue a “trade-not-aid” policy with U.S.-Africa relations and AGOA is a component of challenging the ways that U.S. citizens and corporations think about Africa. African economies are growing stronger; Africa’s GDP growth is projected to increase to 4.5 percent in 2015 and 5 percent the following year and that, combined with a huge youth bulge, are attracting greater foreign interest.

Trade not aid provides a mechanism for shifting away from aid-dependent relationships and moving towards greater autonomy, stability, and security. Food and water security are huge issues in many regions and fundamental to greater development, and their stability is contingent on moving towards greater self-sufficiency. The AGOA creates a climate and opportunities for shifting towards greater accountability, less corruption, and increased development through trade and investment, rather than through huge aid packages. The sub-Saharan region has changed drastically in recent years; becoming increasingly marked by dynamic populations and expanding economies. It is paramount that U.S. trade relations with the region acknowledge the continued and growing importance of Africa as a trade partner and ally.