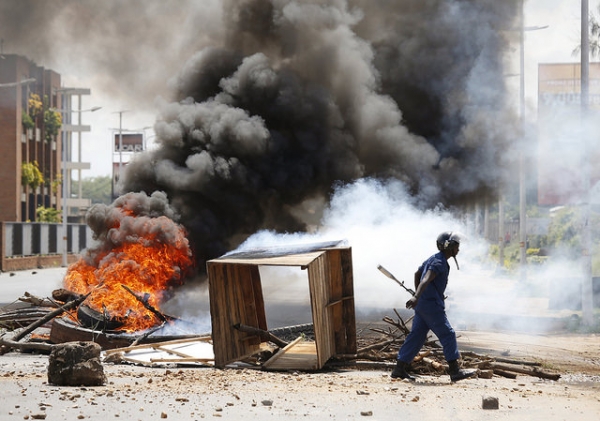 Newly re-elected Burundi President Pierre Nkurunziza won a very controversial third term last week after months of protests and violence throughout the country. Nkurunziza won 69.41 percent of the vote while his nearest rival took 18.99 percent. Nkurunziza announced in April 2015 that he would be seeking his third term, creating controversy as many claim the constitution of Burundi as well as the Arusha Peace Agreement limit his presidency to two terms.

The controversy over the elections has led to protests, violent crackdowns and censorship, and an exodus of refugees into neighboring countries. The United Nations Refugee Agency reports that as of June 30, 2015, 144,000 refugees are currently living in neighboring countries such as Rwanda, Tanzania, and the Democratic Republic of the Congo. Many are escaping the pervasive protests, boycotts, and violent crackdowns that have escalated since Burundi’s constitutional court approved Nkurunziza’s run for re-election last spring.

There have been increasing instances of lethal force used against demonstrators - an estimated 58 people have been killed as of June 29.  Additionally, Nkurunziza and the ruling party, the National Council for the Defense of Democracy-Forces for the Defense of Democracy, have censored and pressured the media with local journalists being threatened by police and citizens suffering from a lack of independent news as well as restricted freedom of assembly.

International condemnation continues over the events leading up to the election as well as the election outcome. In a statement released earlier this week, U.S. Secretary of State John Kerry expressed disappointment in the “deeply flawed electoral process marked by violence and a disregard for the civil and human rights of the citizens of Burundi.” On his trip to Kenya, U.S. President Obama categorized the elections as not credible and called for "dialogue that leads to a political solution to the crisis and avoids the loss of more innocent life.”

President Nkurunziza was the first president after Burundi’s 12-year civil war that killed 300,000. The civil war was incited after the assassination of the first democratically elected president, Melchior Ndadaye, and continued from 1993 to 2005. Similar to neighboring Rwanda, Burundi struggled with post-colonial ethnic tensions between Hutus and Tutsis, which fueled the conflict. The establishment of the 2005 constitution and the Arusha peace accords, along with the election of Nkurunziza, set Burundi on the path to peace.

His bid for a third term, which is expressly precluded by the constitution, was approved by Burundian constitutional court and has incited debate and conflict, leading to a failed coup in May led by Major General Godefroid Niyombare. Although he entered Burundi’s leadership at a time of nascent peace for the country, Nkurunziza is on the path to setting a dangerous precedent for the country and for the region.

Nkurunziza’s bid to serve a third term feeds into a culture of life presidency that are endemic in sub-Saharan Africa - a practice which undermines democratic systems. Three African leaders have been in power for over 30 years, and nine countries have had the same leaders for over 20 years. Eighteen African countries do not have presidential term limits, and in those countries that do have such limits, they are often disregarded such as in Burundi.

Disregarding constitutional term limits creates instabilities not just in the country but in the region. Influxes of internationally displaced persons and refugees have spread from Burundi to neighboring Rwanda, Tanzania, and the DRC. The UN has requested $207 million to manage the over 200,000 Burundian refugees who have fled the election violence, but the request is only 13 percent funded. The flood of refugees is putting stress on the resources of  the host countries and communities, and worsening historic tensions and regional instability.

Most importantly, Nkurunziza’s re-election threatens the ability to hold free and fair upcoming elections in the region. There are 35 presidential and legislative elections scheduled in 2015 through 2016 in sub-Saharan Africa. Nkurunziza’s disregard for constitutional term limits threatens regional cohesion and puts at risk and critical elections in Côte d’Ivoire, Burkina Faso, DRC, Central African Republic, and Guinea. The Burundi elections could have served as a an example for peaceful power transitions in a region that needs a positive mode in a critical time for African governance.

The cover photo, by Flickr user Goran Tomasevic, can be found here.