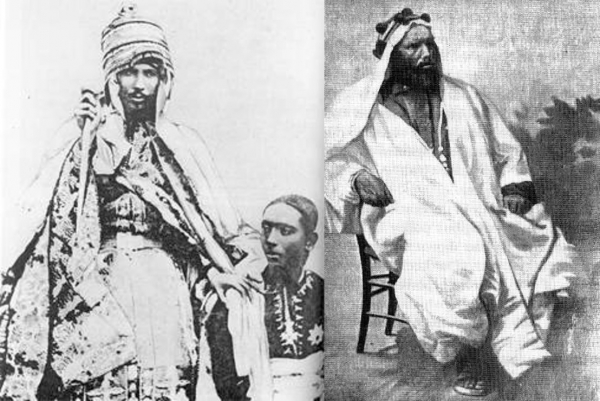 Emperor Yohannes IV (left) with his son and heir, Ras Araya Selassie Johannes, and General Ras Alula Engida (right). Historians credit the emperor and his general--both of whom were Tigrayans--with defending Ethiopian territory and Eritrea from Italian occupation.

Rutha Bahlibi: [00:00:00] Thanks for tuning in to the Harambee Today podcast. This is episode eight of our series exploring the roots of ethnic conflict in Ethiopia. This will be a short episode focusing on the history of Tigrayans.

Dr. Weldu Weldeyesus: [00:01:34] So, they were at the center of the Axumite Empire in Axum, not just only Axum but the present-day Tigray going to present-day Christian Highlanders in Eritrea and then Tigrinya-speaking people in Gonder of the Amhara regional state. All of these are under Tigray. During Emperor Menelik some huge parts of Tigray were put under Gonder. The Southern part, places like present day Alamata, present day Kobo, they were put under Amhara.

Dr. Weldu Weldeyesus: [00:02:18] So when the EPRDF (Ethiopian People's Revolutionary Democratic Front) took control, when they started creating the states, all Tigrinya-speaking people--not only in Tigray during the era of emperors but also other parts which are Tigrinya-speaking people--were (put) under the present-day Tigray national regional state. The primary criterion is the language they speak. And culturally they are the same, and predominantly they are Christians. So you can see that culturally, linguistically, and religious wise, you can see that they are very similar. So, these are the people who are referred to as Tigrayans. And originally the center of Tigrayans was the Axumite Empire.