Devaluation of the Yuan Highlights Risks of China-Africa Trade Relations 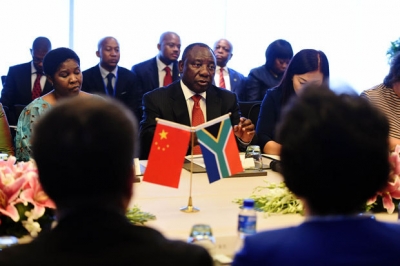 China’s recent currency devaluation could have serious implications for Africa.

Chinese-African trade and investment has grown substantially over the past decade. According to Geoffrey York of The Globe and Mail, trade with Africa last year was more than $220 billion, which was three times greater than U.S. trade with Africa. China’s growth has come with an unprecedented demand for resources, and it has turned to Africa to meet its growing demand for resources, especially energy. By helping promote investment and trade in energy rich African nations, China gains advantageous trade and energy relations with African nations while promoting infrastructure development to energy sectors.

China’s government has historically kept strong control on the value of their currency, but in recent months the Chinese economy has been sliding into decline -  exports, imports, and factory prices have all fallen. For years, the United States has allege China keeps the  value of their currency artificially low to make their exports more competitive internationally.

The devaluation of the yuan is an important reminder to many African nations of their heavy dependency on the Chinese economy. China is the largest trading partner for a majority of countries in the region and is leading many development and infrastructure projects. In addition, some regional economic powerhouses have made shifts in recent years to encourage stronger economic ties - Kenya has set up a clearing house to expedite Chinese imports, and Nigeria has made steps to incorporate the yuan into its federal reserve. The currency devaluation has also affected African stock markets causing South Africa’s market to fall to historic lows.

Another concern is that the devaluation will allow Chinese goods to be more competitive in African markets - potentially driving out regional producers and flooding African economies with cheaply made products.  Yet, many argue that the biggest shock is the reminder of Africa’s overdependence on Chinese trade.

Editor Charles Onyango-Obbo argues that China is “making Africa lazy and unimaginative.”  Although the Chinese competition may encourage greater development, Chinese trade and investment in the region is in pursuit of cheap energy resources to continue to fuel the large, and potentially faltering Chinese economy - not in trying to catalyze long-term, sustainable development. The recent devaluation, coupled with the slow decline that the Chinese economy has seen for the past six months could be the impetus needed to incentivize African economies to promote domestic production, and to diversify away from the monolith of Chinese investment towards smaller, more sustainable investment and development projects.

More in this category: « Ethiopian Exodus Continues Despite Economic Gains at Home  El Niño May Worsen Food Insecurity in Ethiopia »