Ethiopia Rising: Impacts of the Textile Industry in East Africa 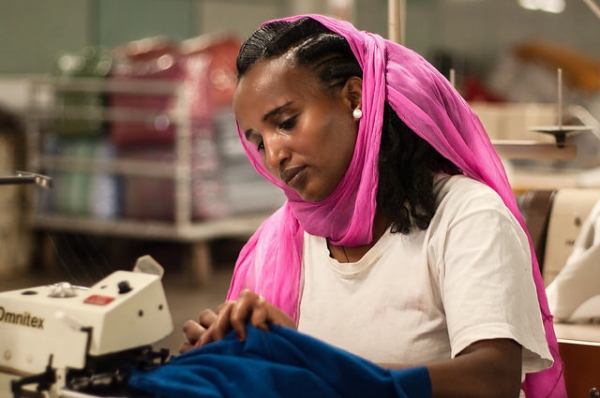 A textile worker in Eritrea/Flickr

Africa’s rising economic strength has been the center of rhetoric, especially in the wake of the first-ever U.S.-Africa Leaders Summit in August of 2014, which created space for U.S.-African financial partnerships and recognized the increasing importance of the region’s economic sectors. In East Africa, especially Ethiopia, Eritrea, and Kenya, the discussion has centered on the pivotal, and growing textile industry, which could change the game for not only East Africa, but garment industry giants like Bangladesh and China.

If Africa is rising, Asia is rising even more. The cost of production in China and other Asian nations is steadily increasing due to increased wages and more stringent standards in the labor industry. The rising cost of production is incentivising factory owners to search for cheap, low-skilled labor elsewhere - mainly in Southeast Asian nations, such as Vietnam and Cambodia - but also now in East Africa.

There are many advantages for businesses  wanting to develop the garment industries in East Africa - the low costs of labor being foremost. Ethiopia has no minimum wage for their garment industry, and the monthly wage of most workers is a fraction of the wages of East Asian laborers; an Ethiopian worker starts at an average of $21 a month, while a Bangladeshi worker will be making an average of $67. In addition, Ethiopia along with other East African nations has a huge population of young, trainable workers that lack the social mobility and opportunities that their Asian counterparts are slowly gaining, creating big labor force potential in the region.

Furthermore, East Africa has inherent benefits that make it well suited for textile development. They can produce their own cotton, which cuts down on transport costs for companies. The cost of leasing land and using electricity is low as the Ethiopian government pursues policies to incentivize international industrialization and investment; Ethiopia offers electricity at $0.05 per kilowatt hour, compared with Kenya’s rate of $0.24. Finally, unlike Asian nations, manufacturers benefit significantly from the Free Trade Agreements that the United States has with many African countries, including the agreement with the Common Market For Eastern And Southern Africa.

There have been positive discussions on the benefits and strengths of Ethiopia’s nascent garment industries. Ethiopia’s government and people, however, still have to battle the stigmas and preconceptions of Western-based industries on the reality of African life, and balance those stereotypes against the very real limits of poor infrastructure and pervasive corruption. The recent opening of two new garment factories in Ethiopia, valued at $2.5 million, on top of the thirty-seven new manufacturers that have joined the industry in the past five years will help attract continued development and industrialization in Ethiopia’s garment and textile sectors. To that end, the Ethiopian government has committed to funding infrastructure at a rate of two-thirds of its GDP each year, hoping to dramatically expand its roads and railways.

The development of Ethiopia's garment industry and the rhetoric surrounding the push for greater international investment has several notable benefits for the Ethiopian people as well. They have benefited from their government’s commitment to greater infrastructure development, as well as the development completed by international corporations. They also benefit from the higher employment rates and export earnings. The employment rates of the industry doubled to 11,716 from 2010 to 2011, meanwhile Ethiopia’s textile and apparel export earnings rose from $12.6 million to $111 million in the same time frame, according to the African news site Caperi. 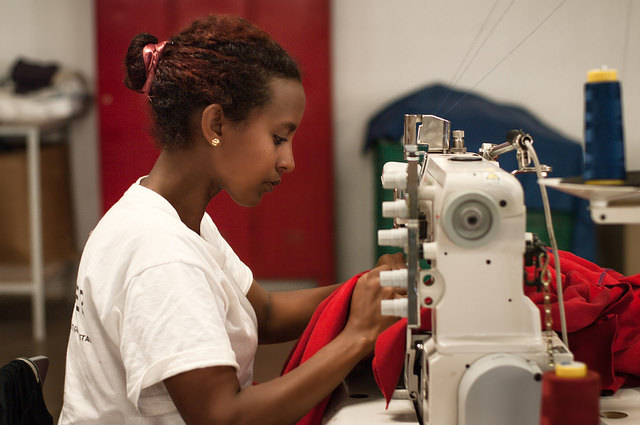 A women work in a textile factory in Eritrea/Flickr

Many have celebrated this shift as a new dawn for African economies- a signal of development, and a step in the direction of the model of Japan and China; moving from cheap and unskilled labor production to high-end technology production and strong economies. Although superficially positive, this is not as easy comparison to make as it might seem.

Historically, African nations has suffered from the “resource curse” - a paradox where countries rich in natural and population resources often fail to see those resources translated in to economic growth and development. Although generally used in reference to oil and energy resources, the root problems are the same - the poor administration of natural resources and failure to develop sustainably, combined with lack of good governance and corruption endemic in many African nations creates a vastly different environment than the environment of Japan or China. For those reasons,  these corporations should not be touted for moving to Ethiopia or other East African nations as they take advantage of the cheap costs of labor and production. In order to truly  foster regional development and improve the quality of life for workers, we need to be candid about the root cause of present conditions in East Africa.

The development of the East African garment industry is not a victory for international free markets and globalization. Rather, it perpetuates a model wherein poor, underdeveloped nations desperate for investments create welcome environments for corporations to exploit people and resources with little accountability. Despite the benefits this system brings to both parties it fails to recognize that the relationship is an extension of a perpetual system of exploitation and underdevelopment. The reason a corporation can pay an Ethiopian garment worker roughly $0.09 an hour is in part because of a post-imperialism economic and political dependency model that Western governments and countries have preserved and profited from.