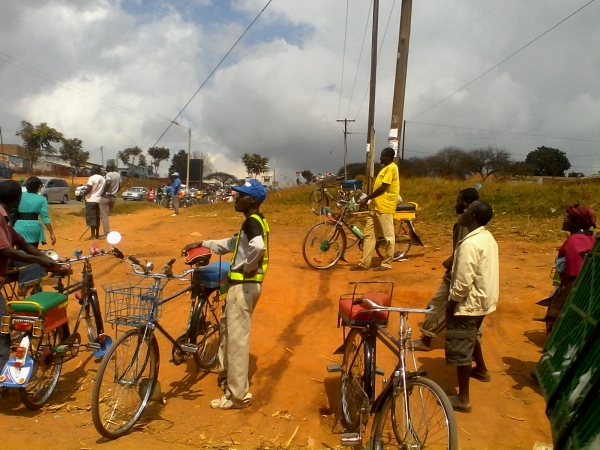 Bicycle taxis have become a main mode of transport in both rural and urban areas in Malawi, and many youth are finding employment in the sector as jobs after secondary school and college remain elusive.

Most people resort to the bicycle taxis because they are affordable and reliable as they can travel to difficult places that cannot be accessed by automobiles. The opportunities have attracted so many Malawians it has become the main informal employer amongst youth in light of the lack of available employment. Apart from carrying passengers, the transport is also used to ferry goods such as agricultural produce from farms or homes to the markets or other areas.

According to Henry Mussa, the Minister of Labour and Manpower Development, at least 1.9 million Malawians are unemployed. Most of the people, however, engaging in the bicycle taxi business have realized more profits and are no longer interested in joining the formal employment sector.

One of the beneficiaries of this business is Joseph Kalinga, who holds a bachelor’s degree in education. He started operating a bicycle taxi in 2013. “I decided to engage in this entrepreneurship business after failing to access a teaching job at the Ministry of Education since my graduation in 2011,” he said. He bought a bicycle with money he earned from rice farming and started operating it as a taxi in Karonga town, which lies on Malawi’s border with Tanzania. “It was not an easy going by then since I was just new in the industry and the fares were too low; however, my story has changed completely because I am raising a lot of money from the business than what a graduate civil servant earns per month,” he said. He estimates that he makes about MWK 3,000 ($6.5) a day per bicycle ride or MWK 90,000 ($195) per month, contrary to a civil servant who earns about MWK 75,000.

Since joining the business, Kalinga has bought fifteen more bicycle taxis and has employed fourteen riders who he pays monthly. He is now a millionaire, who operates other businesses and has become an employer of a number of skilled Malawians who face unemployment problems. “Like all informal transports, the barriers to entry are very low. All you need is a bicycle and a cushion and handle bar for the back,” he said.

Bicycle taxis have become such a popular choice of transportation, each region has its own name for them. For example, in Mzuzu, the capital of the country’s northern region, they are called called Sacramentos. The name originates from Sacramento Speed Buses, which was a state-run bus company which at the time was on the verge of dissolution and replaced by bicycle taxis.

Meanwhile, government says the industry largely contributes to employment creation and poverty reduction in Malawi, which is one of the world’s poorest countries. “Cycling and pedal power is increasingly becoming a tool for empowerment in Malawi, where bicycle taxis and bicycle ambulances are a method of transporting the poor and middle income earners,” Minister of Youth and Sports Development Grace Chiumia told HARAMBEE TODAY.

In some districts, bicycle taxi operators are well organised and even pay a toll fee to the district council, Chiumia said. The councils use the fees to implement social service projects geared at improving the livelihood of the community. According to Chiumia, the government is working on plans to regard the industry as a recognised form of transportation, a development that would see the licensing of operators.

This initiative has also attracted support from the Malawi Police Service who, through their community policing and road traffic departments, have been training the taxi operators on road traffic rules to reduce road accidents which have been common due to reckless cycling. “This industry is highly reducing crimes in the country because most of the people who were engaging in theft to earn a living are now generating money through the business, hence, our involvement in promoting the industry,” said Northern Region Police spokesman Maurice Chapola. Most operators have, however, an adversarial relationship with the traffic police who usually bar the Sacramento taxis from operating in the streets of the city centre, which are considered more profitable due to the heavy traffic and large number of potential customers.

More in this category: « Ethiopia Rising: Impacts of the Textile Industry in East Africa Malawi Businesses Hit by Power Disruptions »