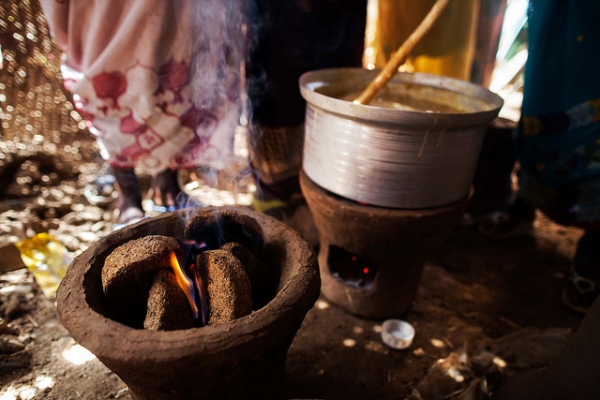 Briquettes being used as cooking fuel/Flickr

“Harambee,” a Swahili word that literally means “pulling together,” has become a powerful strategy taken up by emerging Malawian entrepreneurs.

The dire economic situation in the country has prompted locals to band together and employ “harambee,” to boost the economy by producing and exporting locally made goods.

One example, is a group of college students in the northern border district of Karonga who operate a successful briquette manufacturing company using locally available resources. Consumers use the briquettes as cooking fuel.

“We decided to engage in this business after we realized that the country’s economy needs a pull together spirit to improve,” said Douglass Mnthali, director of Karonga Entrepreneurs Enterprise.

The enterprise is made up of 10 men and women who make the briquettes from rice husks, waste papers, and water. Briquettes are typically packaged in threes and sold for Malawian kwacha 30, or about 6 U.S. cents, and can typically be used to cook one meal.

“We make about 5,000 briquettes a day and sell them at MWK 50,000, or about $100,” Mnthali said. They plan to increase production once they gain access to more supply and are able to hire more producers.

Currently, the group is working on improving production so that they can start supplying briquettes across the country, in addition to exporting to neighboring countries Tanzania and Zambia, where demand for a new source of cooking fuel is growing.

The enterprise has gained support from a number of organizations, including the government-owned Technical, Entrepreneurial and Vocational Education and Training Authority, who has provided new manufacturing equipment for the company. The organization also supports the group with capacity-building, especially in business management and marketing.

“This is a big opportunity for Malawi to pull up its economy because the country will now be getting extra forex through exports of the briquettes,” said Conceptor Bamusi, TEVET’s regional manager for Northern Malawi.

She also said the institution intends to train more entrepreneurs interested in the enterprise to speed up the establishment of the industry in Malawi in order to meet the high demand for briquettes both locally and and in the region.

“Apart from its economic benefits, the industry will also help...to address massive deforestation” caused by over-harvesting of firewood, Bamusi added.

The government of Malawi, through the Ministry of Youth and Sports Development, has also officially expressed its commitment to support the company by providing it with loans from the Youth Entrepreneurship Development Fund.

The initiative “is in line with the government’s commitment to address unemployment and encourage new innovations (and) development through promotion of entrepreneurship,” said Minister of Youth and Sports Development, Grace Chiumia.

Despite this, the enterprise has called on the government to improve its export conditions to allow the company to better realize its dream of exporting the briquettes.

“Currently, it is too expensive to export products from Malawi because of high taxes being imposed by government,” Mnthali told HARAMBEE TODAY. “Hence, we are ranking very poor in exports as compared to other African countries.”

The cover photo, by Flickr user UNAMID, can be found here.