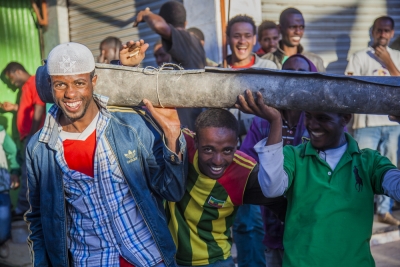 Workers at the Merkato in Addis Ababa, Ethiopia. The Merkato is one of the largest open-air markets in Africa. Ilia Torlin / Shutterstock.com

Despite the global economic and financial crisis in recent years, African economies have continued to record average annual economic growth of five percent since 2000. According to African Development Bank, the region’s economies are likely to expand by an average 4.8 percent in 2014 from 3.9 percent last year, rising to 5.7 percent in 2015. In fact, six of the world's fastest growing economies are in Africa, making the continent the world's second fastest growing region. Yet, vulnerable employment remain the reality for the vast majority of youth in the continent.

The vulnerable employment rate in sub-Saharan Africa is estimated at 77. 4 percent in 2013 which is the highest rate of all regions worldwide, the International Labour Organization states in their latest Global Employment Trends report. Vulnerable employment refers to workers holding the type of jobs defined as a self-employment jobs and who do not have any employees. It also refers to unpaid family workers working for a member of the same household.

According to the report, employment growth remains weak, unemployment continues to rise - especially among young people- and large numbers of discouraged potential workers are still outside the labour market.

The youth population in sub-Saharan Africa is increasing rapidly. Nearly one in three people living in the region, or about 297 million, are between the ages of 10 and 24. By 2050, that age group is projected to nearly double to about 561 million, according to data from the Population Reference Bureau.

The ILO report also noted that expanding employment opportunities for both young people and women can contribute significantly to an increase in GDP per capita and help larger parts of the population to benefit from wealth generated in these countries.

Meanwhile, the report stated that “North Africa needs to undertake substantial efforts to diversify the sectoral allocation of the foreign direct investment inflows. This requires the necessary business environment for foreign investors to also put their money outside the traditional industries and, for instance, create opportunities in high-skilled services or the manufacturing industry. Trying to achieve and maintain macroeconomic stability in this environment will be a key challenge for 2014 and the coming years.”

“Young people between 15 and 25 represent more than 60 percent of the continent’s total population and account for 45 percent of the total labour force,” estimates the African Economic Outlook. “Unlike other developing regions, sub-Saharan Africa’s population is becoming more youthful, with youth as a proportion of the total population projected at over 75 percent by 2015, due to the high fertility rate underlying the demographic momentum. It is expected that this increase in the number of young people will not decline before 20 years or more.”

In his statement on youth unemployment in Africa, chief economist for The World Bank’s Africa region Shantayanan Devarajan said the challenge “is not just to create more wage and salary jobs important as this may be but to increase the productivity, and hence earnings of the majority of young people who will be employed in informal farms and household enterprises.”

He explained that “because most Africans will work in informal farms and household enterprises, the challenge of increasing their productivity needs to be met by first increasing their basic skills, which they can then take with them when they move to the new enterprises; and second, creating jobs in the formal sector by improving the economy’s competitiveness so that this sector can absorb more qualified workers into a productive workforce.”

The firm with the collaboration of The G20 Young Entrepreneurs’ Alliance recently published a new report that emphasized the potential of entrepreneur-led businesses creating more jobs than large corporates over the coming years, with 76 percent of entrepreneurs saying they’ll expand their workforce in 2014.

To tackle the prevailing risk of youth unemployment, the African Development Bank Group prescribes, amongst other things, youth development through five core operational priorities: Skills and technology, private sector development, infrastructure, regional integration, and governance and accountability. To implement the strategy, the bank seeks to engage with policymakers, the youth, and private sector to develop solutions to these challenge.

The Nigerian government has already taken steps to improve conditions with programs such as the Youth Enterprise with Innovation in Nigeria and the Subsidy Reinvestments and Empowerment Programme's Graduate Internship Scheme.

Moreover, the World Bank has set up a wiki to invite researchers, policymakers, stakeholders, and others from around the world to share knowledge on how to increase economic opportunities for youth in sub-Saharan Africa.