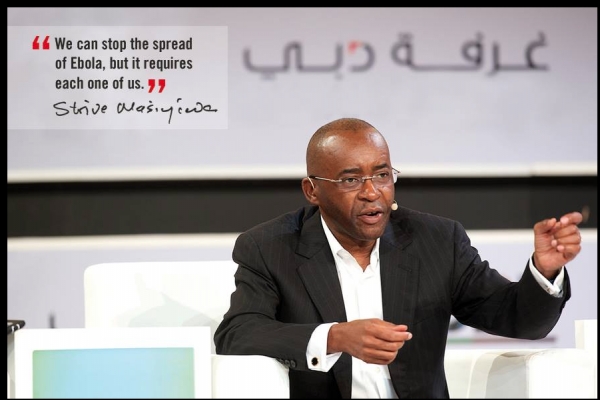 Screenshot of a photo on Strive Masiyiwa's Facebook Page

One of Africa’s most influential business leaders and the founder of Econet Wireless Group is leading the fight against the Ebola epidemic in West Africa.

Through his Facebook fan page, Strive Masiyiwa, who is also known as Zimbabwe’s richest man, has been engaging the public on how to combat the deadly disease.

“A few months ago, I wrote on this page, that Ebola is a very serious threat to Africa, and the world. As an entrepreneur, and a nation builder, you should be very concerned about what Ebola, has done, and more importantly what it could do,” Masiyiwa said in a recent post. “Whether you are working in a business or working as an entrepreneur, there is something you can do to help fight the spread of Ebola.”

He said based on its rate of infection, experts have been projecting that it could infect over 1 million people by January 2015.

“We can stop the spread of this disease, but it requires each one of us. Yes, this is not a problem that is going to be solved by the United Nations or the United States or the Europeans. It can only be stopped by each one of us, acting as a global citizen. I say global citizen, because Ebola does not know borders, or race or age, or skin colour. It will kill anyone who gets infected; rich or poor, old or young.”

Masiyiwa instructed his company to set up programmes to curb Ebola in all the countries where it operates across Africa.

Going by this instruction, Zimbabwe’s largest mobile telecoms operator Econet Wireless has been working with various government departments, including the Ministry of Health and Child Care, to prepare Zimbabwe for any possible outbreak of Ebola.

In another post on Facebook, Masiyiwa noted that the company has set up a project called Ebola Readiness Taskforce. “This is a task force which works on making sure staff at the company are informed about Ebola and how to combat infection and spread at the business. They must also work on ways of helping our customers.

They put up posters, they hand out leaflets, and also carry out other measures using our businesses' local capabilities.”

“We have a budget to support the various initiatives,”Econet Wireless Zimbabwe CEO, Douglas Mboweni said in a press release. “This includes providing financial support to initiatives by government. We are working very closely with government and key NGOs. Our sister companies also have their own budgets and work plans in the countries where they operate.”

Mboweni said his mission was to ensure that Ebola does not break out in Zimbabwe, but if it does, it must be isolated quickly and the infected people given treatment.

He explains that although Zimbabwe have no reported cases of Ebola that has affected Guinea nations with over 4,920 people having succumbed to it and at least 13,700 infections recorded to date, it was still  prudent that measures be put in place to ensure that the health sector and all Zimbabweans are aware and ready to respond should this disease ever come to the nation.

He said Econet's Ebola task force in Zimbabwe reports to a group taskforce, which is headed directly by Mr. Masiyiwa, and is dealing with similar efforts in countries like Rwanda, Lesotho, and Burundi. The team includes doctors and other specialists.

“Econet Wireless Group is one of the many African companies that are supporting the initiative by the African Union to send health workers to the affected countries. We will definitely be there as we have to work together,” Mboweni explained.

He said Econet Wireless is a seasoned campaigner when it comes to addressing disease outbreaks, adding that when Zimbabwe was afflicted with Cholera in 2008, the company set up the National Healthcare Trust which mobilized doctors and nurses to fight the outbreak.